As some of you may know from reading my post about my tattoos, I was born with a congenital heart condition. I had heart surgery this past Tuesday (June 28th) and after sharing an Instagram post, I realized that a lot of people have gone through or are going through the same/similar thing I have. So I decided to write about not only the surgery, but my experience overall of growing up with this condition.

I was born with a condition called Tetralogy of Fallot. Basically what this means is that there are four defects within the heart. They include: a hole between the lower chambers of the heart, an obstruction from the heart to the lungs (an unattached pulmonary artery and missing pulmonary valve in my case), a misplacement of the aorta, and a thickening of the muscle surrounding the lower right chamber. They discovered this within hours of me being born, and two days later I had my first closed heart surgery. During this surgery they placed a BT shunt so that I’d have blood flow past my lungs.

Fast forward 2 years and I’m having my first open heart surgery. I have little memory of this operation, but plenty of pictures (thanks Mom & Dad). During this operation, the doctors attached the pulmonary artery and opened it up, deconstructed the BT shunt, and placed a pericardial patch between the ventricles. There’s nothing really to be done about the aortic misplacement, so it’s still slightly off to this day. The operation took about 6-7 hours and I remained in the hospital for about 2 weeks. They chose not to place an artificial valve at that time because of my size and how quickly kids grow. To limit the amount of surgeries I’d have to undergo, they decided to wait.

For the next twelve years I had to see my cardiologist every six months to a year, do a bunch of really boring tests like EKGs, echoes, stress tests, etc etc etc. I’d have to routinely wear 24hr monitors, and sometimes event recorders for up to a month. I was limited in some things I still can’t do: rollercoasters, skydiving, scuba diving, really anything with G-forces involved, or super extreme. But, I was able to do sports, and lead a fairly normal life. Just a hole in the heart and more doctors than most people.

When I was fourteen, my team of awesome doctors and surgeons decided that the right side of my heart was getting too big, and that it was time to implant a valve. I underwent a heart catheterization to get internal pictures and size the valve, then came time for the big kahuna. They opened me up and placed a Gore-Tex valve, which was actually created by my surgeon, Dr. Quintessenza. The operation took about 7 hours. 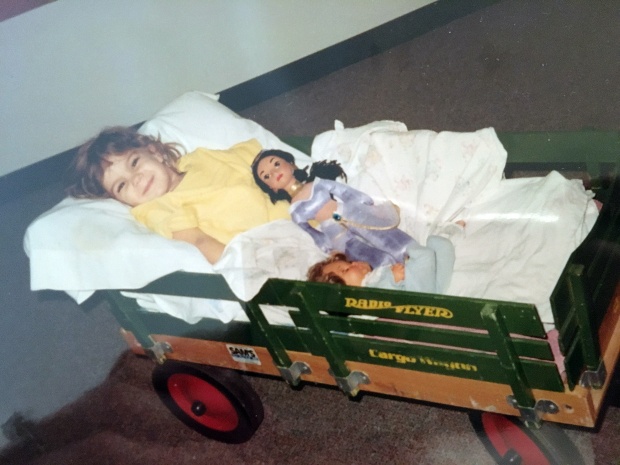 I remember this surgery vividly, but pretty much refused to let anyone take pictures of me, because you know, I was a fourteen and a huge brat 😉 If you’ve never had an open heart surgery it kind of feels like someone ripped open your chest and put it back together…which essentially is what happens. You don’t really feel anything with the heart, but there is so much muscle that they cut through, and they have to crack your sternum so it is painful, to say the least. Sneezing, crying, vomiting, laughing, coughing-huge pain triggers after this surgery. Even thing you wouldn’t even think about, like getting in and out of bed, or sitting up hurt so bad. I was in the hospital for about a week-but full recovery took about 6 weeks.

After I healed from the surgery I felt incredible. It wasn’t like I felt bad before, I just didn’t realize how much better I could feel. It was like I didn’t know what  I was missing. I felt stronger, like I could breathe better. There were no weird palpitations. It was amazing.

About a year ago, I started noticing weird heartbeats, and some tightness in my chest. I would have random pains, and feel like heart heart was doing backflips in my chest. I had been in college, gone to Europe and kind of fallen off the grid from my cardiologist (which I highly recommend not doing). It got really bad one day at work and I ended up in the ER. The ER doctor on call basically told me that I was having a panic attack and gave me some pills, but I knew it was more than that. If I have one piece of advice for anyone going through this kind of thing or something similar is listen to yourself. You know your body best and if it feels off, then be adamant about it.

I ended up going to see my cardiologist and he told me that the right side of my heart had gotten enlarged again, and that the artificial valve wasn’t functioning properly anymore. I would need to have to have it replaced. The good news? In the ten years since I’d had my last surgery they’d developed a way to implant it through a catheter going up the femoral artery &vein (in the leg), so no open heart! Within two months I was on the schedule for heart surgery.

That brings me to Tuesday, June 28th, 2016. I arrived at the hospital at 9:00am (starving and thirsty af) and they began all the pre-op procedures. IVs, monitors, etc. Eventually I was wheeled to the operating room, and I walked myself up to the table and hopped up on it. They put an oxygen mask on me and asked if I wanted to watch Frozen. We joked about how they’d probably seen the first ten minutes a hundred times, and sometime after then I passed tf out. Seriously, I don’t remember anything past the Frozen talk.

During this operation they did a transesophegial echocardiogram (whatever that means), some other tests, and replaced the valve. Basically they put a catheter up both my femoral vein & artery, threaded the compacted valve up the catheter, expanded it and then it just stays there. I now have whats called a Melody valve, if you want to read more about that.  Science..I know.

When I came to, my nurse was there as well as my dad, but I don’t remember much. Apparently the first thing I asked for was my phone…typical. I was pretty out of it, but I remember feeling super nauseous and getting sick, which I usually do with anesthesia. Other than that I was pretty dazed and confused. I did manage to snap a sweet pic though:

I was only in the hospital for one night (which is awesome), and was home by noon the next day. I’m still pretty sore an walking around like an 87 year old, but other than that I feel pretty good! For the future, they’re hoping I don’t need another surgery, but only time will tell. Surgery is never fun, but this was one wasn’t too bad. I should be able to go back to work in a week, so overall it’s been pretty non-disruptive to my life.

Also, if you’re lucky you get sweet inappropriate gifts like these from your friends 😉

It’s been a really long road, and hopefully I won’t need much more “maintenance” in the future. The best things I can say to people in this position is that yes, it sucks tremendously and sometimes you wish you could just be a different person with a working body-but at the end of the day..I’m alive and have so much to be thankful for. I’m thankful to all my doctors who’ve kept me alive all these years despite my inability to follow directions.

If any of you have been through this, or something like it, let’s talk about it! I’d love to know your experiences and how you got on. Any questions or comments are welcome in the comments section below. As always, thank you for reading and stay golden xx

26 year old lover of life. I enjoy blogging about beauty, travel, food, among other random topics. View all posts by thecaitycat

4 thoughts on “My Artificial Heart: Growing Up With a Congenital Heart Defect”

Just a girl, wandering the world. Bringing you a few of my favorite things.